Read on to learn the basics of barrel aging and how to get started.  To see some additional barrel aged cocktails and spirits go here.

Once the concept was introduced by Jeffrey Morgenthaler around 2010, barrel aged cocktails became the next great drink and are now easily found at upscale bars across the country.  When a cocktail is barrel aged it takes on flavors from the wood and if it contains a fortified wine, from some oxidation as well.  The result can be amazing.  The idea seems easy enough: make up a cocktail, pour it into a barrel and wait a few weeks.  Of course, there is a little more to consider, especially if you are wanting to do this at home.  I do recommend trying this at home.  So, let’s look at how best to do this, and at some choices you will need to make.

We are going to discuss:

What is happening to my drink?! 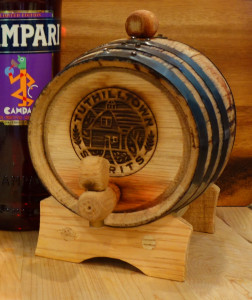 When you barrel age a cocktail you are doing two things:

We generally consider oxidation to be a bad thing.  Think of red wine that has been sitting on the counter a week after it was opened.  Actually, oxidation is essential for the development of wine – especially fortified wines such as Sherry and Madeira.  It is oxidation occurring after fermentation that is generally considered a bad thing.  In this case, oxidation will develop flavors of apple, cider, nuts (especially almonds), candied fruit and yeast. There is also a bitter component.  The flavor can be described as “flat,” with a loss of fruitiness.  In a barrel aged cocktail, this presents itself as a mellowing of flavors.  The extent to which each of the above mentioned flavors occur will depend on the contents of your cocktail.  The process of oxidation is most pronounced with drinks containing fortified wines.

As noted, barrel aging is simply infusing with charred wood. If you age a cocktail in a new barrel, the flavors added to the liquid are frequently described as a combination of bitterness, vanilla, nut, caramel, walnut, coconut, and clove.  If your barrel is used, it will impart additional flavors from whatever was in it previously.  Examples are cherry from sherry and sweet spice from bourbon.  All of this becomes more interesting when the barrel’s previous occupant was a different cocktail.  I will discuss this more later, but for now let’s move on.

What kind of barrel should I get and from where?

Like any infusion, the greater the surface area of the solids to volume of liquid – the faster the process.  This means that smaller barrels will infuse (barrel age) the cocktail more quickly than larger ones. 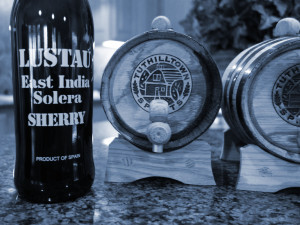 The other consideration in deciding the barrel size is: How much do you want to make of a single cocktail?  A liter barrel will make 8-12 drinks.  Larger barrels will yield more drinks, but you can make multiple small batches with smaller barrels.  Plus, as we will discuss, you have to keep the barrel going.  You can’t let it sit empty – you have to keep using it.  So, keep in mind how many barrel aged cocktails you will serve.

We chose to go with two, one liter barrels.  Two barrels allows some flexibility.  The one liter size will produce the number of barrel aged drinks that we are likely to serve.

Barrels are available at some high end liquor stores and online.  Try:  Tuthilltown or Oak Barrels Ltd.  We ordered from Tuthilltown.  Just be sure that the barrel is charred and made for actual use and not for decoration.

Which Cocktails to Try?

As noted, cocktails containing some fortified wine lend themselves best to the aging process.  This is most probably due to the oxidation of the fortified wine adding to the complexity of the finished cocktail.  It doesn’t make a lot of sense to me to barrel age a drink made solely from already aged ingredients: such as barrel aging an Old Fashioned.  We thus far, have aged a Martini and various Manhattans and Negronis.

An interesting side product has been the Sherry and whiskey that we used to flavor the barrels.  The Sherry took on a pleasant flavor of oak with dried cherries and figs.  The whiskey initially began to taste like a young bourbon with vanilla, cinnamon and clove.  After the barrel was used for a Negroni, the whiskey went back in for a few weeks.  This time there was an added dried fruit and richness along with the smoky, charred oak.  After the Martini was aged, the whiskey picked up herbal notes from the dry vermouth and gin.  What we try with the Sherry and whiskey will be a tale for another day!

The Step by Step How to

The first thing you will need to do, after obtaining your barrel, is to wash it thoroughly with water.  Simply fill, shake, drain, repeat – until black bits stop coming out.  If you fill your barrel with liquid at this point, it will leak.  You need to fill it with filtered water, close it up and let it sit overnight.  This will cause the wood to swell and seal the majority of the leaks.  I say “majority” because the barrel will still drip some.  For this reason I suggest you set the barrel on something like a plastic container lid.  Once you’ve rinsed and soaked it, your barrel is ready for use. 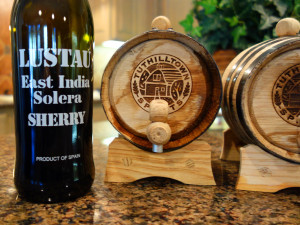 While a cocktail could, at this point, be put into your barrel, I strongly suggest that you flavor the barrel first.  Starting with a fortified wine or whiskey will add flavors that you can’t get from new charred oak.  The goal is to add something that the cocktail doesn’t already contain.  We used Sherry for the barrel to age Manhattans.  Other options would be Madeira or Port.  Our other barrel was started with un-aged corn whiskey.   This barrel was destined for Negronis and other cocktails.  After 4 weeks, rotating the barrels 1/4 turn each week, we drained the barrels and rinsed them.  The 4 weeks was arbitrary.  It could have been longer, but probably not shorter.  The aged Sherry and Whiskey were returned to their original bottles.  They were then reused in the barrels between cocktails.

Now it is time for your cocktail.  Whatever you’re going to age, use your best, most favorite recipe.

Calculating the quantities of each ingredient is simple: 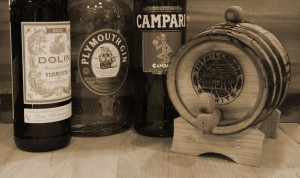 You will obviously want to round down to not waste any ingredients.  You do want to plan enough liquid to nearly fill the barrel.  Partial filling can lead to an area of dry barrel which will leak and possibly to excessive oxidation. 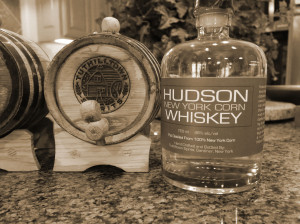 When you’re ready to load your cocktail, combine all ingredients in a single container, preferably with a pour spout.  You may or may not want to include bitters.  You can always add them to individual servings.

Push the spigot tightly into the barrel.  You may want to test this the first time by adding water thru the bung whole to check the seal.  If you do, be sure to completely drain the barrel.

Important note:  When you push the bung into the bung hole, you will create a small amount of pressure in the barrel.  This will lead to an initial increase in leakage.  To prevent this, once the bung is in place, turn the barrel on end, spout end up and open the spout.  You will get a tiny spurt of liquid.  Close the spout and set the barrel on it’s side in the cradle.

Taste your cocktail frequently.  This should even be daily for lighter drinks.  Heavier drinks, such as Manhattans and Negronis, can wait a week, but taste frequently.  Cocktails age from ‘not-quite-there-yet’ to ‘over-the-hill’ very quickly.

While aging, turn the barrel 1/4 turn each week.  This keeps all of the barrel wet and exposes the liquid to all of the wood surface.

Before I get to actual recipes: how you store your aged cocktail is important.  First, use a glass bottle with a tight seal.  A bottle with a cage top will work very well.  Secondly, refrigerate the cocktail.  This will slow further oxidation.  Your aged cocktail will change over a week or two.  To me, the flavors become flat, more bitter and less complex.    In short, plan to finish it off in a week to 10 days.

To serve, measure out the volume that would have been in the original, single drink.  Add this to a mixing glass with ice and stir to chill.  The chilled cocktail will be stronger than one you started with at room temperature.  This is because chilled ingredients will not create as much dilution from melting.  Before you serve the drink, taste to see if it needs a little water. 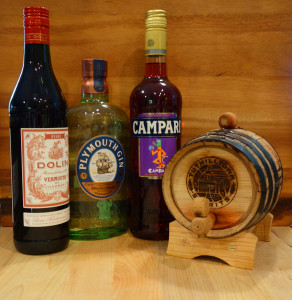 Use a whiskey barrel.  Plan on 3-4 weeks of aging.  I left the bitters out of the aging process and added them to the individual cocktails.

For a 1 liter whiskey barrel: 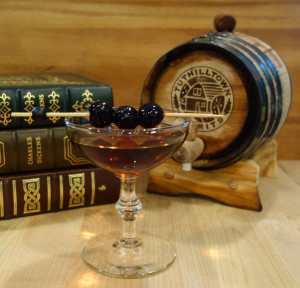 I think that this is by far the best cocktail to age.  Use a barrel that has been seasoned with a fortified wine.  We used Sherry.  Plan on 4 weeks of aging.

For a 1 liter Sherry barrel: 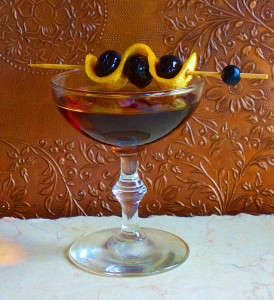 I include this as an example of what not to do!  I like this cocktail, though I’ve never given it a name.  Barrel aging it in a Whiskey/Negroni barrel sounded like a good idea.  However, I got distracted and failed to taste it for a week.  By the end of 1 week, it was ruined.  This cocktail is bright, floral and herbal.  After 1 week in the barrel it was left flat, with faint oak, a touch of juniper from the gin and that’s about it!  If I had tried this with the ‘Alternative’ below, I could have saved a lot of alcohol!

For a 1 liter whiskey/Negroni barrel:

Aging brought nothing to the party.  I do not even plan to try this with bottle aging.  Bottom line: Don’t waste the booze!

So, can barrel aging be done without a $50 – $75 barrel, 1+ liters of expensive booze and 3 – 4 weeks?  The short answer is “Yes.”  The long answer is “Yes, but it won’t be quite the same.”  Tuthilltown did offer a Cocktail Aging Kit consisting of a 12 oz. bottle with a charred “barrel stave.”  With this, you could age a cocktail in 2 weeks or less.  I don’t think they still offer this product, but you can purchase staves here.  These will fit in any

750 ml bottle or use a 375 ml bottle.  The results will not be identical to barrel aging.  You will have less complexity probably due to less oxidation in the sealed bottle.  This can be a good thing….or not.

I have tried to flavor a stave with whiskey and then use it to age a cocktail in the bottle.  This did not work.  The staves don’t have a lot of life so you have to toss them after 1 or 2 drinks.

Overall, the Pros outnumber the Cons.  I still suggest that you try the real deal and get a barrel or two.  The bottle would be a good way to test age a cocktail before committing to a large volume and a lot of time. 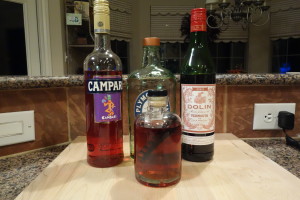 Barrel aging is definitely worth doing at home.  I also recommend the use of Tuthilltown’s Cocktail Aging Kit, if for nothing more than age testing your cocktail recipe before going to the time and expense of barrel aging.

In addition to Manhattans and Negroni variations, (such as the Boulevardier,) you should consider aging tequila based drinks, cocktails combining fortified wines, and Maritinis.  Just Google “barrel aged cocktail recipe” for some great ideas.